Data is the currency of the information age, so it should come as no surprise one of the more frequent tasks integrators, users, and system administrators encounter when implementing or maintaining a Microsoft Dynamic NAV installation is data migration. The four common approaches to getting the data from where it resides into NAV are: manual entry in the NAV client, using SQL server’s database tools, using NAV’s Excel mapping, or via a NAV Dataport or XMLport.

So what’s a savvy system integrator to do? Use the Insight Works Universal DataPort, our gift to you!

At its core the Insight Works Universal DataPort is a NAV dataport that automatically sets the fields to import based on the values that are present in the first row of the tab delimited import file. Users have the ability to select which fields the NAV business logic should validate, can specify if new records should be inserted or if existing records should be updated.

It’s true that NAV 2013 will do away with dataports completely, but the Universal DataPort is great for any pre-2013 databases, and all the code in it is easily ported to an XMLPort (stay tuned – we’ll be releasing that shortly). 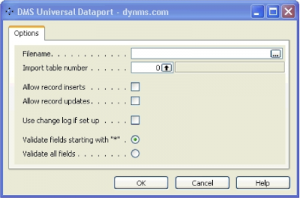 Filename: The name of the tab delimited text file to import

Allow record inserts: If checked new records will be created.

Use change log if set up: If checked the actions of the Insight Works Universal DataPort will be logged in the change log (if it is configured to log the table and fields being imported or updated).

Validate fields starting with “*”: If checked the NAV data validation routine will only be called for fields that begin with an asterisk on the first row of the import file.

Validate all fields: If checked all fields that exist in the import file will have their imported values validated.

A basic import into the NAV “Location” table appears in Excel below:

The first row tells the Insight Works Universal DataPort to import values into four NAV fields; “Code”, “Name”, “City” and “Phone No_”. The asterisk in front of the “code” fieldname would indicate to the Dataport to validate this field, assuming the “Validate all fields” option was not enabled. Note that the Universal Dataport will accept field names in the NAV format (using punctuation as in “Phone No.”), or in the SQL format that replaces punctuation with underscores (like “Phone No_”).

Saving this spreadsheet as a tab delimited text file would yield the following file which can be imported into NAV:

Though the Dataport functions very well as-is, there are a lot of possibilities for extending what it can do, including:

If you experiment with updating the Dataport, let us know – we’d be curious to see how people build on it.

We use cookies to ensure that we give you the best experience on our website.
If you continue to use this site we will assume that you are happy with it.
Continue